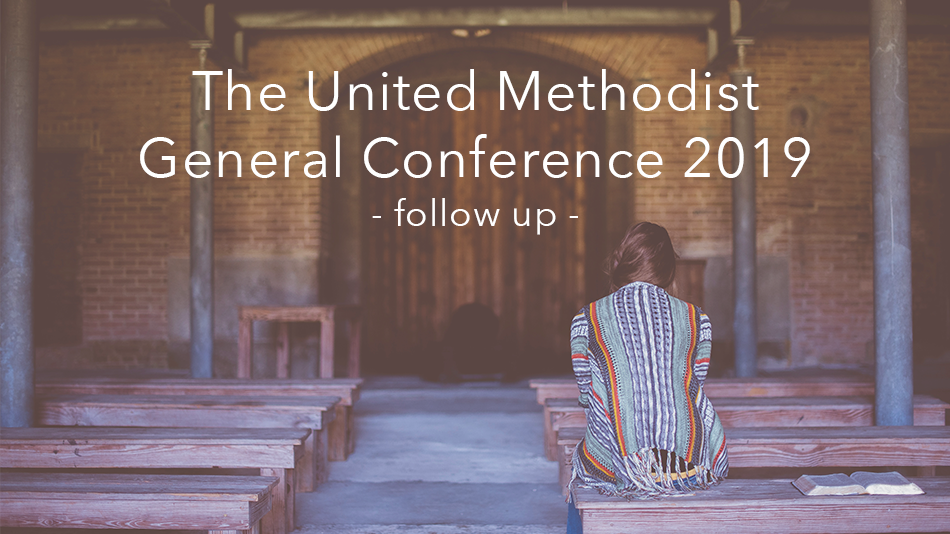 The Special Session of the United Methodist General Conference concluded Tuesday evening February 26 in St. Louis, Missouri. Delegates from all over the world voted on the church’s stance regarding human sexuality and same-gender marriage. General Conference is the only body that can make decisions for our denomination or changes to our Book of Discipline. Many petitions were submitted and debated by the 864 international delegates.

Thank you to those who joined in prayer for this important decision during this painful time of deep disagreement in our denomination. The opening of General Conference proceedings on Saturday displayed a beautiful international gathering of Methodists worshipping God and humbly seeking God’s guidance in prayer.

Following the prioritization of four proposed plans (The Traditional Plan, The One Church Plan, The Connectional Conference Plan, and The Simple Plan) delegates began deliberations. Amendments were made in the full committee on Monday and final amendments and votes were taken in the plenary session on Tuesday. What was the decision?

The United Methodist Church voted to maintain a traditional position on human sexuality and marriage.

​The United Methodist General Conference voted to approve the Traditional Plan with amendments. The votes were 438 in favor, 384 against. The Traditional Plan maintains the church’s long-standing stance on traditional marriage between one man and one woman and does not allow for the ordination of self-avowed practicing homosexuals. Some Methodists are pleased by this news and others are saddened. Some Methodists support and affirm the Conference’s decision and others are hurt and disappointed by the actions taken. We are deeply divided. The Traditional Plan will go to the Judicial Council for a declaratory decision on the United Methodist constitutionality of the plan. Their rulings could impact the outcome of the decisions made.

What does this mean for Central United Methodist Church?

For Central, this means there will be no change in our current understanding regarding human sexuality and the definition of marriage. Central will continue its policy not to perform same-sex marriages in our sanctuary nor will our clergy perform same-sex marriages in other locations. There is also no change in our current hospitality toward all people. We invite everyone to our church and we want those in the LGBTQ community to feel welcome and want them to find a loving faith home at Central. Some may choose to paint Methodists in a disparaging light because this vote was not more progressive and that would be unfair to Central’s membership.

You can access additional information about the decisions of the special session of General Conference at www.umc.org and www.arumc.org.

I have previously shared with our congregation that I support the traditional definition of marriage and do not seek to perform same-sex marriages in the church. In my opinion, I believe the passing of the Traditional Plan is the best decision for Central United Methodist Church in Fayetteville. You can access a series of blogs Dr. Steve Pulliam and I wrote that outline our theological understanding of human sexuality and marriage. The blog series is entitled Standing Firm Moving Forward published in September 2018 at www.centraltolifeblog.com.

Central’s Church Council meets on March 4, 2019, to process the results of the General Conference decision. We will continue to focus on our mission of making disciples of Jesus Christ who make disciples for the transformation of the world. Praise and glory to God.

Yours faithfully in Christ,