The history of Central United Methodist Church began in early frontier days, soon after the Louisiana Purchase and before Arkansas became a state. Central Church has been as much a part of Fayetteville's history and landscape as Dickson Street, the Square and the University of Arkansas.

Sixteen adults signed the charter of Fayetteville Methodist Church in 1832 at the log cabin home of Lodowick Brodie south of the Square. Fayetteville became a preaching point on the Washington County Circuit, pastored by rugged circuit riders who covered more than 100 square miles on their rounds. The Arkansas Conference, organized in 1836, covered two states, Indian Territory and part of a foreign country. 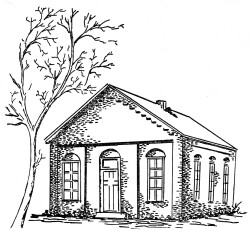 The new congregation met in the Brodie home for three to four years until they outgrew that location and started meeting in the new Washington County Courthouse on the Square. The Brodies bought a lot for $54 on what is now West Center Street and donated the land for a church; a one-room, modest frame building that was finished by 1840. The Cumberland Presbyterian Church, which had been organized first in 1830, also worshiped in the Methodist Church building until its members built their own church on North Block Street.

The Methodist congregation grew, and Sunday school classes and a choir were started. The population of Fayetteville was then about 420, with most businesses and homes clustered around the Square. The town and church were important enough to host the 4th Arkansas Methodist Annual Conference, held in Fayetteville in 1839.

The 1844 General Conference division over the slavery question resulted in the formation of the Methodist Episcopal Church, North and South. Fayetteville became the Methodist Episcopal Church, South at this time. A Methodist
Episcopal Church North existed for only a short time. The congregation kept growing, to 58 members, and in 1857 the Fayetteville church became a "Station," supporting its first full-time minister. The first church building was burned in 1863 during the Civil War, as were all the homes, businesses and churches around the Square.

The Arkansas Industrial University was started in Fayetteville by 1872, bringing many Methodist families, students and instructors to town, and increasing the membership. A small, one-room, red-brick church building was built on the site of the earlier frame church building. This building, 25 feet wide and 50 feet long, was set back from the street, leaving room for a front lawn. This site (112 West Center Street) is now a municipal parking lot and is marked by a plaque placed by Central U.M.C. in 1993. 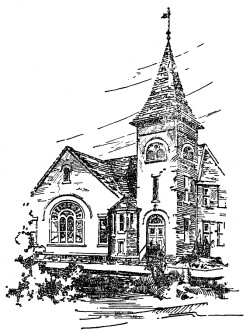 By 1874, the Fayetteville Church had again become a "Station" with a pastor, and a great religious revival began with months of preaching and many conversions. The membership swelled to 178. There was an organist and a choir director. Sunday school was so popular that eight to ten classes met, with attendance of 70-100 students, all in one room. General Conference granted women of the church the right to create an organization to "take the gospel to the women of other lands." Women's groups formed in the Fayetteville congregation: "We Girls" for younger women; a "Ladies' Aid" Society; and by 1887, an auxiliary of the Women's Foreign Mission Society. The Epworth League was authorized in 1890 "to promote piety and loyalty to our church" and encourage the young people in education and missionary work. It soon became the largest in the state.

The membership of the Fayetteville congregation, now called Central Methodist Episcopal Church South, kept increasing so that by 1899, with a congregation of 365, a larger church building was needed. Property was acquired and a third church building was constructed on Dickson and Highland streets. This brick building, built in an architectural style called "The Akron Plan," had an entry through the corner bell tower and seated 600 in three sections of pews. There was a curved altar rail and large stained glass windows. A parsonage was also acquired, north of the church on Highland Street.

The 75th Anniversary of "Methodism in Fayetteville" was observed at a celebration in November 1907: a booklet was published, and Bishop Hendrix preached at both the morning and evening services. In 1914 the North Arkansas Conference was formed. The parsonage was moved one lot north to accommodate a frame Sunday School Annex for a growing congregation of over 660 members. Central Church was committed to programs for youth and the university students, and several different women's groups also met at the church.

The Western Methodist Assembly was established on Mt. Sequoyah in 1920, with support from the City of Fayetteville and Central Church. Mt. Sequoyah Assembly has remained a popular training ground and retreat for Methodists and other denominations from surrounding states, and continues to be an asset to the city. 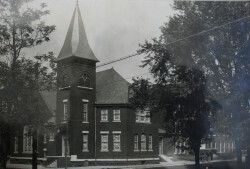 In 1924 The Wesley Foundation began, and a pastor was appointed to minister to the university students. Wesley Hall was completed in 1925, which included the Pastors Study, offices, kitchen, Fellowship Hall and a stage where "The Wesley Players" put on theatrical performances. The "Wesley Brotherhood" was organized, later becoming the "Methodist Men." The Bulletin became a regular publication of church services and announcements and has been continuously published.

The Centennial of Central Church was observed over three days in September of 1932 with much community fanfare: a history was published, a historical bulletin was distributed to the membership, and both local newspapers devoted space to the history and to the special observances being held. A pageant was presented in the Chi Omega Greek Theater in honor of Central's Centennial: "The World is My Parish - John Wesley", written by Miss Jobelle Holcomb, a church member.

After the unification of the three leading branches of Methodism in 1939, the church became "Central Methodist Church." Women met as the Women's Missionary Society and later as the Women's Society of Christian Service (W.S.C.S.).

In 1946, a Prayer Chapel was built between the Sanctuary and Wesley Hall, and it was a popular place for small weddings. The post-war years were a time of great growth, and people had to be turned away from worship on some Sundays for lack of room!

In 1953, after acquiring additional property along Dickson Street, the church built an imposing "New England Colonial" style Sanctuary for its congregation of 1,715 members, centering the Sanctuary on East Street. The footprint of the Sanctuary was in the shape of a cross, with the Nave and Chancel area forming the upright part of the cross; the transepts are the cross arms. Approximately 3,600 attended the four opening day services. By 1954 a new parsonage was built on Highland Street, and in 1955 a Wesley Hall addition was constructed on the site of the old church. 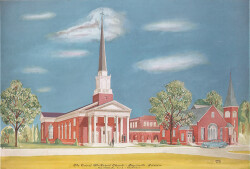 The 125th Anniversary Observance in 1957 featured a three-day celebration with a dinner, a tea, historical displays, a narrative with music ("The Everlasting Song", written by the Senior Pastor's wife, Ellen Bearden), plus a Pilgrimage to Elm Springs and Thornsberry Campground, another site of early NW Arkansas Methodism. The U of A Wesley Foundation Student Center was constructed on West Maple Street that same year.

In 1960, Arkansas was designated a separate Episcopal Area with its own Bishop. In 1961, a children and youth building, to accommodate 500 children, was constructed on Dickson Street and connected to the Sanctuary by a covered walkway. In 1968 the Uniting Conference of the Methodist and Evangelical United Brethren Churches renamed the church "Central United Methodist Church", and the Women's Society became the "United Methodist Women" (U.M.W.).

The next few years were very challenging for the congregation: on December 4, 1969, the Sanctuary burned. Rebuilt by November 1970 on the same site with the same building plans, (plus some additions and upgrades), the church suffered a second fire in the Sanctuary in November 1971, which heavily damaged the interior. By February 1972, the Sanctuary was again ready for services. 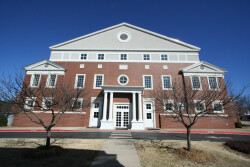 The next decades were a time of growth, additions and outreach in all church areas. The parsonage property began to be utilized for ministry, and a home was purchased elsewhere for the Senior Pastor. In 1994, a more casual "Oasis" Saturday night service was introduced in the Wesley Building Fellowship Hall. The largest building project during this time was Central's Activities Center, completed in 1997 as a multi-purpose facility. The 9:45 a.m. Contemporary Worship Service began there in 1997, followed by an 11:00 a.m. Contemporary Service in 2002. The church was also able to acquire additional properties on Highland and Lafayette streets as they became available over the next few years.

During 2007, the Terquasquicentennial (175th anniversary) of the founding of the 16-member Society in 1832 was celebrated by Central United Methodist Church with a number of special memories throughout the year, creation of a booklet of 175 facts about the history of the church, and special services.

In 2008 construction of a 32,500 square foot Student Ministries Building at the corner of Lafayette and Highland was completed along with a 215-space, four-floor parking deck along Lafayette Street. The new facility houses Central's youth ministries, childcare center, Central Childrens Academy, and pre-school programs.

In 2014, Central launched a satellite campus on Martin Luther King Blvd at the former Wiggins Memorial United Methodist Church.  This new congregation, Genesis Church, offers multiple worship opportunities on Sunday morning and focuses on engaging with the homeless and disadvantaged population in Fayetteville. Genesis Church is a very diverse socio-economically.

In 2016, Central opened a new facility on the University of Arkansas campus for college ministry under the auspices of the Wesley Foundation and in partnership with the Arkansas Conference of the United Methodist church.  The purpose of U of A Wesley is to reach out and receive students into a community of faith in Jesus Christ; to strengthen their relationships with God, each other, and the church; to nurture them as maturing leaders and disciples of Jesus Christ; and to equip and support their Christian witness and service at the University of Arkansas and beyond.

In the fall of 2018, a remodel of the church's historic sanctuary was completed that resulted in the addition of a new music suite on the north side of the sanctuary that provides modern rehearsal space, music department offices, restrooms, and a new gathering room.   The main sanctuary also received a face-lift with an expanded chancel area, improved sight lines, increased visibility of the altar, ramp accessibility, hardwood floors and wood window shutters that resulted in enhanced room acoustics.

In the summer of 2019, a two-year project to replace the church's organ was completed.  A new 54-rank organ was installed by Buzard Pipe Organ Company of Champaign, Illinois.  The installation of the $1.5 million instrument was largely made possible by one generous Central family.

In its long and storied history, Central has had several name changes, spawned several new congregations around Fayetteville, had 52 senior pastors, built and remodeled many buildings, and has grown to its current membership of over 4,700 with approximately 1,800 worshippers each week. The Easter 2018 worship attendance was 4,137 and the 2018 Christmas Eve worship services totaled 3,218. 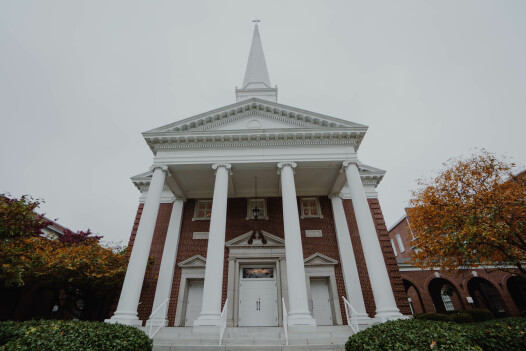